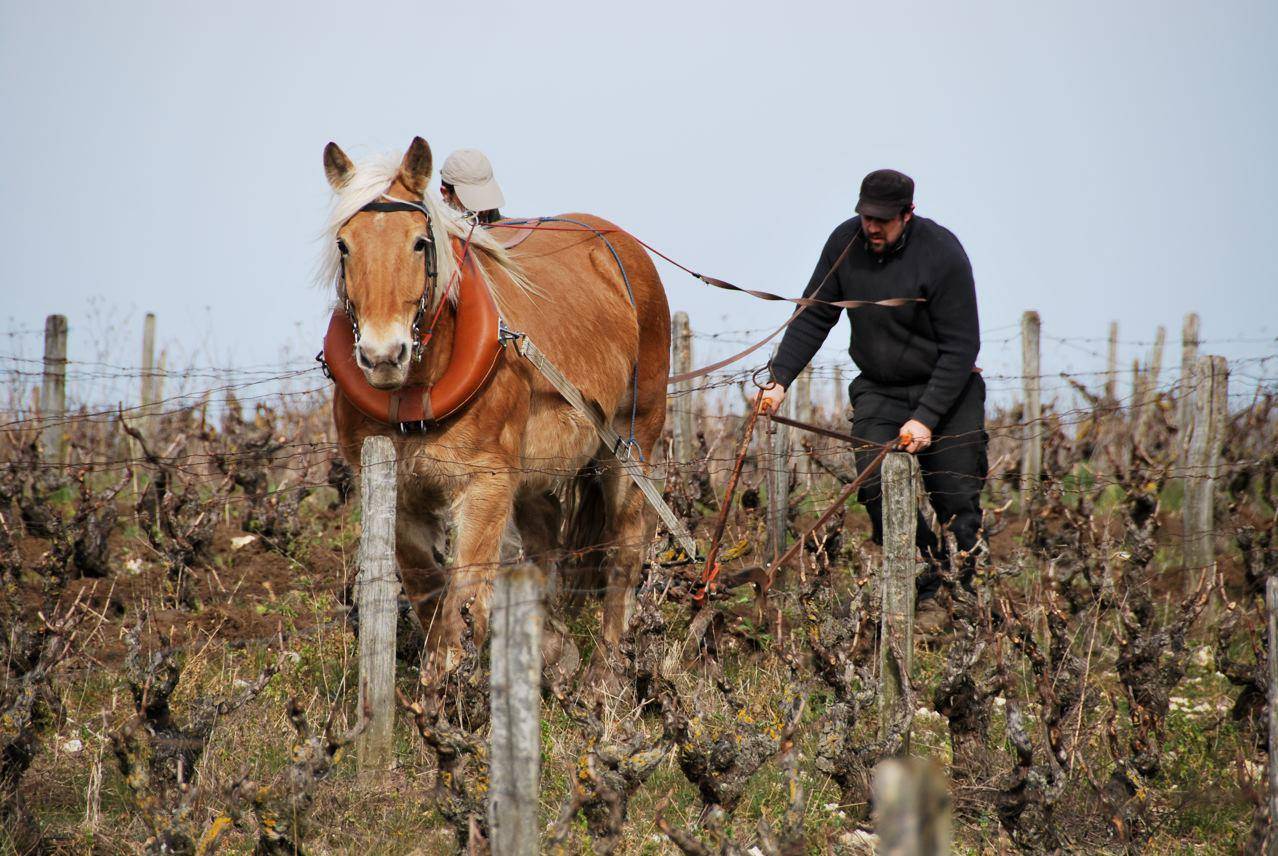 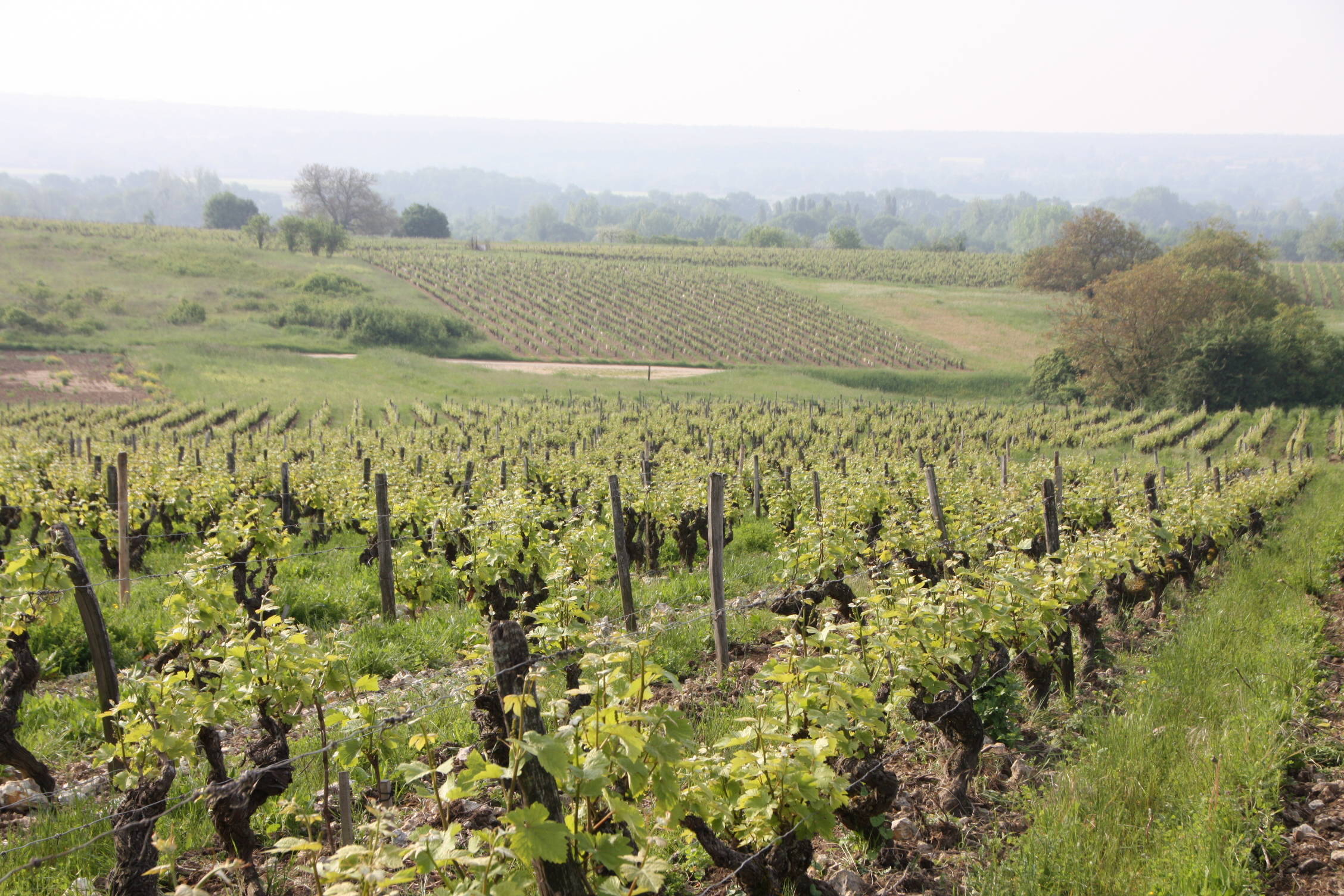 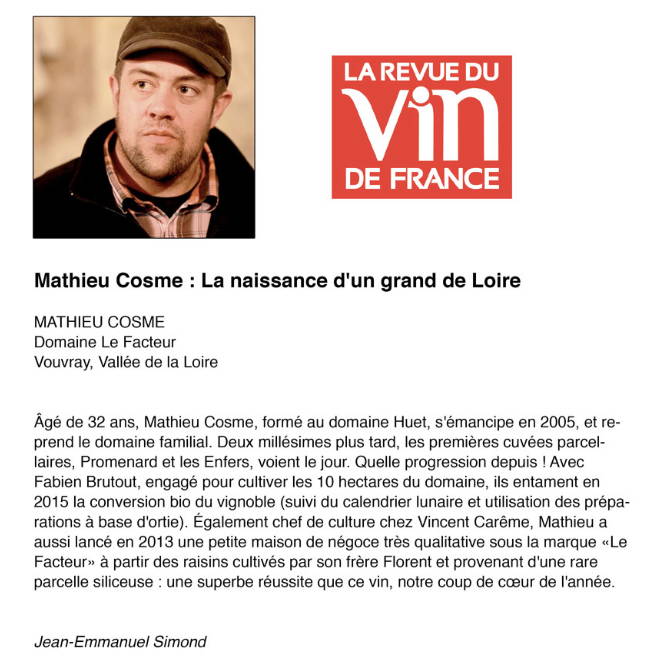 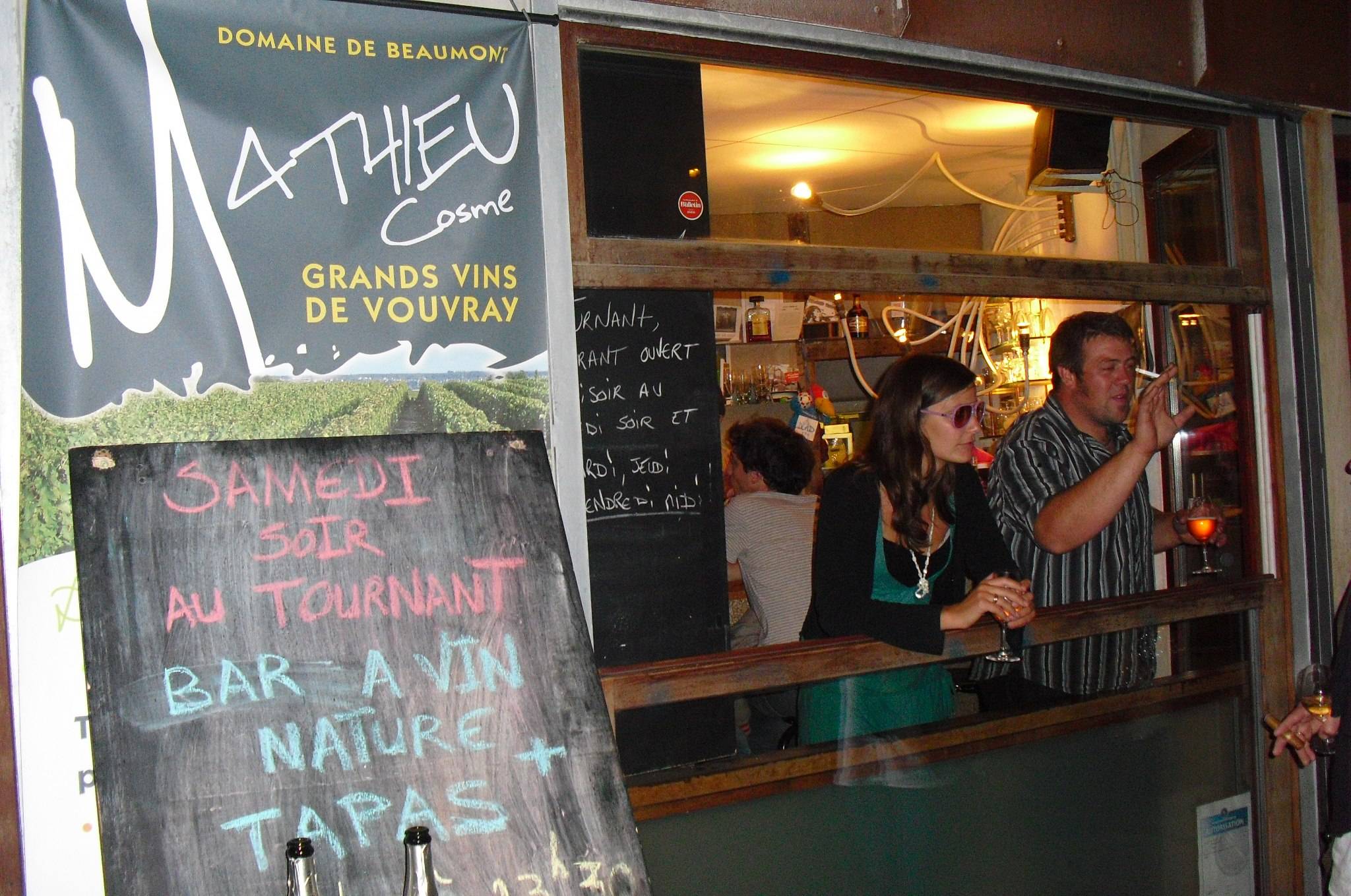 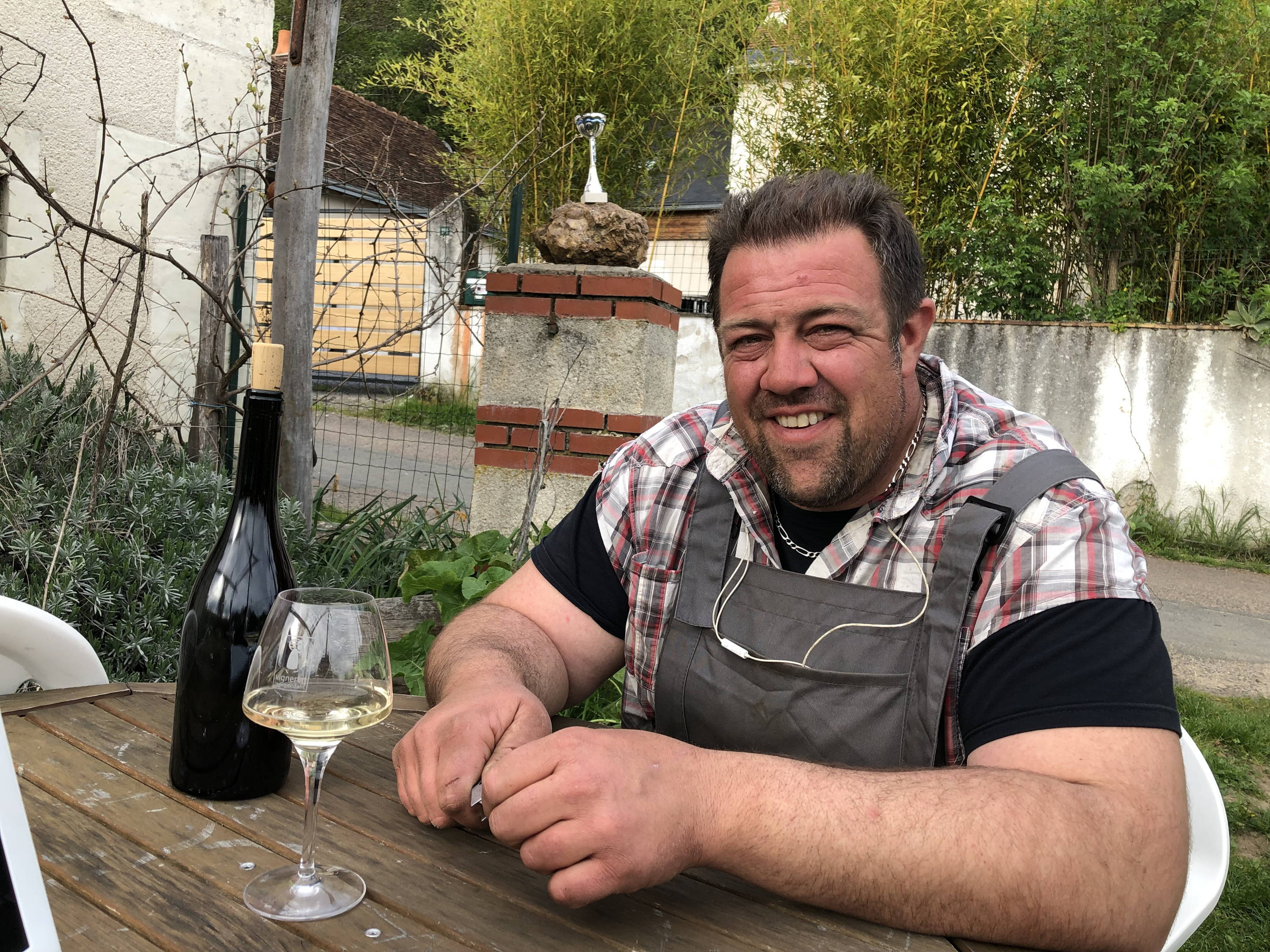 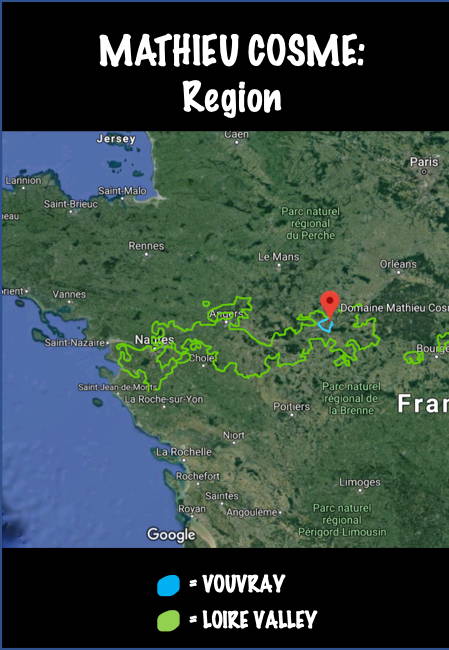 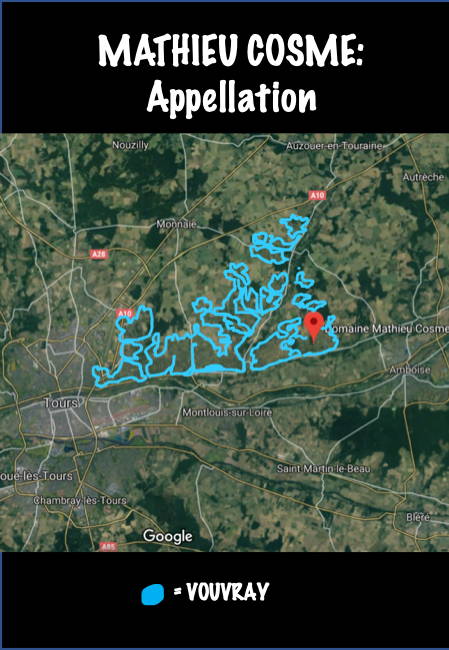 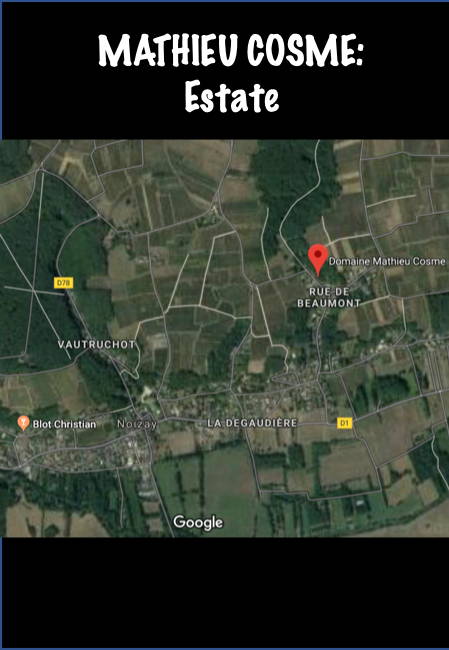 For four years while in wine school, Mathieu Cosme worked as a winegrowing assistant at the famous Domaine Huet, the leader of biodynamic practices in Vouvray. Cosme recognized that Huet’s expertise in these methods was a big factor in their success. He observed that the work in the winery is easier when the grapes are perfect and perfect grapes only come from diligent work and care in the vineyard.

Once he learned the ropes at Domaine Huet, Mathieu quickly transformed his family’s prized estate vineyards—part of Loire Valley’s protected Unesco World Heritage site—to become one of the most sought-after producers of Vouvray. Today Mathieu Cosme is named at the top of the list of Vouvray’s emerging young talents by PUNCH magazine.

When Mathieu was only 13, his father died and his mother was then forced to sell their grapes to the local cooperative so that she could afford to retain their highly regarded land. She put Mathieu through school to study viticulture and enology.

In 2005, after Mathieu received his enology degree and served his apprenticeship with Huet, he returned to his family vineyards. He quickly applied his expertise in farming to convert the vineyards to organic and then biodynamic. He gradually stopped selling his fruit to the cooperative, so that he could bottle wines from the estate, becoming the fifth generation of winemakers in his family.

Achieving a full aromatic expression of Chenin blanc is a primary goal of Mathieu’s; in addition to pure farming, he allows a longer than usual hang time before harvest. The process develops thicker skins and thus, more complex phenolic ripeness in each grape. Mathieu feels the reward is worth the weather-related risk that comes with longer exposure to the elements. Also with such astute attention in the vineyard, he is able to monitor acidity and obtain true balance at harvest. Farming organically with biodynamic practices, he remains unobtrusive to the vine’s natural voice. In the oldest lots—some 80 years old—he lessens soil impaction by working the vineyards with a horse in place of a heavier and more polluting tractor.

Tuffeau, an ancient chalky limestone dating back 90 million years to the Turonien prehistoric era, composes most of the rocky limestone slopes of his estate. At the top of his southeast-exposed slopes is more Silex, or flinty soil, where the Chenin vines grow for Le Fines Bulles, his sparkling wine.